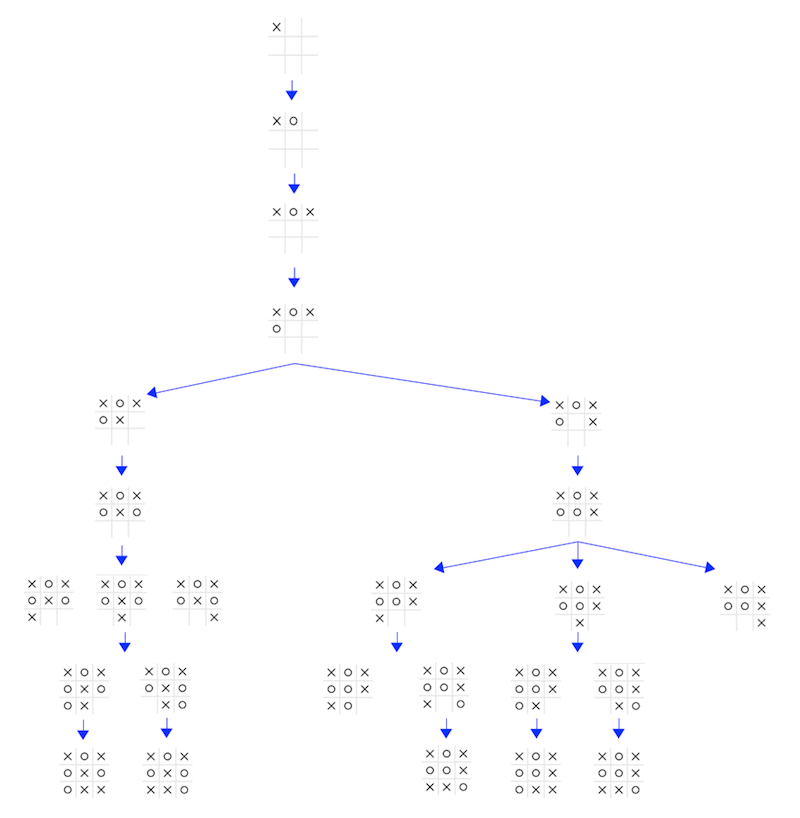 Figure 1. A diagram of possible tic-tac-toe game states (nodes) from first moves to last possible moves. Diagram breadth has been severely limited so that we may follow a couple pipelines (sequences of moves) to their end states (leaf nodes).

A great place to begin contemplating the science behind a computer program’s mastery of Go is at the beginning of the recent paper “Mastering the game of Go with deep neural networks and tree search” (published January 28, 2016 in Nature).

The first sentence begins “All games of perfect information…”

Let’s contemplate tic-tac-toe. What could be easier?

The first of two players sets an ‘X’ (cross) in one square in a three-by-three grid. The first player has 9 possible squares to select from (see Figure 2 below).

Figure 2. There are 9 and only 9 possible first moves in tic-tac-toe.

The second player then makes her first move by setting an ‘O’ (nought) in 1 of the 8 remaining squares in the three-by-three grid (see Figure 3 below).

So far we’ve considered the number of possible locations each player may play their move during their turn (breadth of possibilities) and just the first move of players one and two deep (depth; the sequence of moves across alternate turns). However, the depth of our inverted tree continues until a player wins with 3 in a row or all of the 9 squares are filled. Figure 1 above shows a diagram with restricted breadth but full depth.

At top of Figure 1 is our first player’s first move. Recall that this is just 1 of 9 possible moves (1 from a total breadth of 9).

The third level down in Figure 1 shows our first player’s second move based on our second player placing a nought in top row center. This is 1 of 7 possible moves.

In the fourth level down, our second player responds with her second move. One of 6 possible moves.

Notice in the fifth level down, our first player’s third turn, I widen the breadth a bit and show 2 of the player’s 5 possible moves so we can see some of the variability in the end game (leaf node) pattern.

On our players’ fourth move (seventh and eighth levels down from top in Figure 1) we begin to see leaf nodes where the game ends. Two of the 3 possible first player moves displayed in level seven of the left-most branch are end leaf nodes with three crosses in a row (our first player would win).

This glimpse at a piece of the complete tic-tac-toe inverted-tree game space shows us how all of the information about winning, losing, and draw exists before a game of perfect information is even begun. Players choose from a limited set of options that determine the options that follow.

Today’s computers can easily maintain the complete game space information for tic-tac-toe. However, as the game becomes more complex, the game space increases extremely quickly. Checkers has a space of about 500 billion billion, chess has about 1040 and Go, another game of perfect information, has a space larger than all of the atoms in our known universe!

Clearly it’s possible to play games like Go since humans have done it for a very long time. How does a human brain do it? How can we get computers to do it? We’ll continue to explore these problems right here on my ActionPotential blog.

This past March a high profile challenge match for one million dollars took place between the computer program AlphaGo and the world’s top human Go player Lee Sedol. AlphaGo won 4 out of 5 matches and won the challenge.

Five months before, on October 2015, AlphaGo became the first computer program in history to beat a professional Go player when it won 5 out of 5 matches against European Champion Fan Hui. The following January, the paper “Mastering the game of Go with deep neural networks and tree search” (published January 28, 2016 in Nature) was published that discussed the mechanisms used to power of AlphaGo in that match. They may be summarized as powered by deep neural networks trained using a combination of 1) supervised learning from human expert games and 2) reinforcement learning from games of self play (see Figure 1 above).

An enormous amount of research is encapsulated in the overview shown in figure 1. Stay tuned and we will examine the science behind the computer algorithms that enabled AlphaGo to play go at an impressive level of mastery. 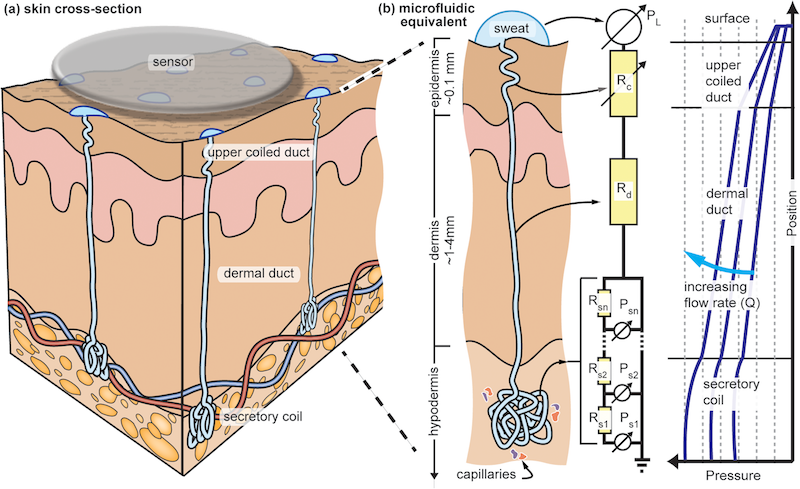 Figure 1. This cross-section through human skin displays the structure of sweat glands. A sweat sensor has been placed across the skin’s surface. From Figure 1 in the paper “The microfluidics of the eccrine sweat gland, including biomarker partitioning, transport, and biosensing implications” published May 15, 2015 in Biomicrofluidics.

We act through muscles and glands. Glands, specifically sweat glands, are a potentially rich source of personal data and a promising target for wearable technology.

New wearable sweat sensors are appearing on the market (Eccrine Systems, Inc., biolinq) and the recent paper “The microfluidics of the eccrine sweat gland, including biomarker partitioning, transport, and biosensing implications” published May 15, 2015 in Biomicrofluidics points to exciting insights we may gain from sweat sensing wearable technologies.

Collating years of sweat gland research, the authors describe measurable constituents of sweat, from tiny charged sodium and chloride ions to protein molecules like neuropeptide Y and various cytokines. It’s well established that a significant increase in sweat chloride concentrations suggest a diagnosis of cystic fibrosis. It’s also well known that alcohol appears in sweat about five minutes after drinking an alcoholic beverage. More recent research suggests that data gathered from sweat have the potential to indicate (provide markers) for far more, including insight into a person’s cognitive state. For example, neuropeptide Y, known to sometimes play a role as an anti-stress and anti-depressive agent, is found in sweat in proportion with its concentration in blood.

Meanwhile, first to market wearables that sense sweat are targeting the exercise market (Kenzen). Potassium ion concentration in sweat is proportional to blood concentration and can predict muscle activity, ammonia in sweat is related to exercise intensity, and high exertion exercise results in higher concentrations of lactate in sweat.

Twenty-sixteen is looking like the year that generally available wearable gadgets will get more interesting. Sweat sensor wearables may provide a new way to monitor chronic health issues, drug research, and more.