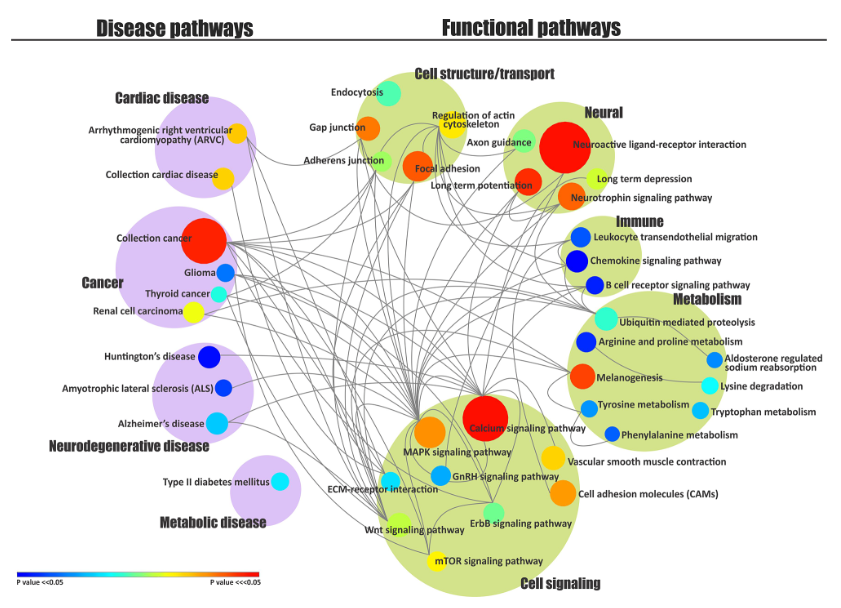 Interactions between the top 50 pathways from 659 Autistic Spectrum Disorder (ASD) genes are displayed. Pathways are grouped as Disease Pathways (left column; purple) and Functional Pathways (right column; green). The color of each node inside the groupings represents the p-value of that pathway (p-value bar at lower left). The size of each node represents the number of ASD genes in that pathways. From Figure 2 in “Pathway Network Analysis for Autism Reveal Multisystem Involvement, Major Overlaps with Other Diseases and Convergence upon MAPK and Calcium Signalling” published April 7, 2016 in PLOS One.

Autistic Spectrum Disorder (ASD) is defined behaviorally and has no known biological marker. Does ASD encompass a collection of disorders? Are they necessarily disorders or simply differences that may become disorders under some biological or environmental circumstances? We simply do not know for certain.

Research has shown that hundreds of genes, multitudes of biological pathways, and many systems seem to contribute to ASD. If all of these data are brought together and visualized will it provide a clue to the biological basis of ASD? The recent publication “Pathway Network Analysis for Autism Reveal Multisystem Involvement, Major Overlaps with Other Diseases and Convergence upon MAPK and Calcium Signalling” (April 7, 2016 in PLOS One) attempts this approach with genes and pathways known to be active in ASD patients.

When this study began, 667 genes were thought to contribute to ASD. Of these, 659 genes were in the annotation set the researchers were using to do analysis. They examined the interactions among the pathways associated with these genes and selected the top 50 pathways based on the statistical significance of pathway overlaps. Their results are displayed in the figure above.

Notice that the figure is divided into two columns. At left is the Disease Pathways column (purple). At right is the Functional Pathways column (green). Each node in a pathway grouping has a size and color. The size represents the number of ASD genes in that pathway (larger diameter means more genes). The color of each node represents the p-value of that pathway (p-value bar at lower left; red indicates a very high significance of overlap).

The resulting map shows three “hot” spots that are both large diameter (a lot of ASD genes) and red (very high significance of overlap) under the Neural and Cell Signaling functional pathways and the Cancer disease pathways. Specifically, the following three nodes stand out: 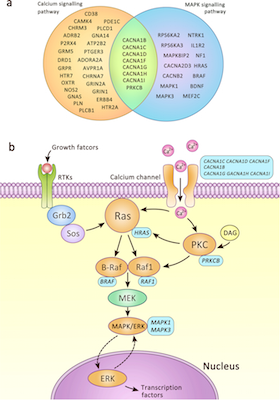 Data showed that MAPK signaling pathway interacts with half of the pathways in the network and is the most interactive pathway in the ASD data. They showed that the calcium signaling pathway is the second most interactive pathway and is associated with the most ASD genes. These two pathway types overlapped with 8 ASD genes (green intersection) known to be important in the process of calcium-PKC-Ras-Raf-MAPK/ERK. From Figure 3 in “Pathway Network Analysis for Autism Reveal Multisystem Involvement, Major Overlaps with Other Diseases and Convergence upon MAPK and Calcium Signalling“

Neuro-active ligand-receptor interaction is key to communication between each and every nerve cell both in our brains in throughout our body. The calcium signaling pathway is fundamental to each and every cell in our bodies. The genes and pathways were identified in ASD patients because their products and interactions were significantly different than in non-ASD patients. Do those diagnosed with ASD have significantly different metabolisms than the rest us? Do their brain cells communicate differently?

Research based on pulling together existent data is implicitly biased by the experiments that were performed to produce those data. Perhaps researchers were most interested in cell signaling and cancer genes and pathways and that is the reason that these kinds pathways are more common in data repositories. The result could be their prominent association with ASD genes.